Nestled in the beautiful Tennessee Valley surrounded by streams, outdoor wildlife and picturesque views of the mountains, it situated half-way between Chattanooga and Knoxville. Athens is only a 30 minute drive to the Cherokee National Forest and is also very close to the world-renowned Great Smokey Mountains National Park.

Recruitment Package may include:

McMinn County was organized on November 12, 1819, and its government was established in March of 1820.  It was named after Joseph McMinn who was Governor of Tennessee at the time of the organization and was active in the political constitutional convention in Knoxville.  He personally delivered Tennessee's proposed constitution to President George Washington.  Joseph McMinn's public service career included eight terms in the General Assembly, three as speaker of the Senate, and three terms as Tennessee's fifth governor from 1815 to 1821.  He later served as an agent to the Cherokees.  Joseph McMinn died in 1824 and is buried in Calhoun.

Education is important to the community, and there are three school systems which operate in McMinn County. For children who live in the city limits of Athens, the Athens City School system offers award-winning educational opportunities. There are five schools in the city school system: two primary schools for kindergarten through second grade, two intermediate schools for grades three through five and one middle school for grades six through eight. The McMinn County School System includes seven elementary schools, two high schools and a vocational school; this system serves approximately 5,800 students. Etowah City’s system has a K-8 school with almost 400 students served. Private education is also an option with a few private, primary schools. In addition, McMinn County is home to Tennessee Wesleyan College, a private, liberal arts college with campuses in Athens, Cleveland and Knoxville. Cleveland State Community College also has an Athens site, as does the Tennessee College of Applied Technology.

Both Knoxville and Chattanooga are approximately 45-minutes north and south, respectively, of McMinn County and have large airports, shopping and dining opportunities.

Southeast Tennessee offers boundless opportunities for outdoor recreation. The Cherokee National Forest is about a 30-minute drive, and the Great Smoky Mountains National Park, and the attractions of Gatlinburg, Pigeon Forge and Sevierville are just an hour and a half away by car. More locally, the Tennessee Overhill region, consisting of McMinn, Monroe and Polk counties, contains more than 50 waterfalls, the Ocoee River, site of the 1996 Whitewater Olympics, the Tellico and Hiwassee rivers, Cherohala Skyway, a scenic drive across the Appalachian Mountains and a scenic train excursion from Etowah to Copperhill, TN. McMinn County is also home to four golf courses and a short drive to Watts Bar Lake and Tellico Lake, both offering fishing, skiing and waterfront living.

Cultural events, music festivals and concerts, and other activities are just as plentiful. The Athens Area Council for the Arts offers world-class performers and entertainers at local venues, including the Tennessee Wesleyan College’s Townsend Auditorium, throughout the year. McMinn County is home to a number of fun, family-friendly events throughout the year, including Etowah’s Old Fashioned 4th of July Celebration, Pumpkintown, the Fried Green Tomato Festival and various Christmas parades and special celebrations. For those who seek the excitement and entertainment of a larger city: Knoxville and Chattanooga are less than an hour away, while Nashville, Atlanta and Asheville less than a three hours’ drive from McMinn County.

Starr Regional Medical Center is a comprehensive medical center serving the southeast Tennessee Region with campuses in Athens and Etowah. Located halfway between Knoxville and Chattanooga, Athens is home to approximately 13,000 residents and serves as the county seat of McMinn County.

Located in Athens, Tenn., Starr Regional Medical Center’s Athens campus is licensed for 112 beds and has four medical office buildings on campus providing many primary care and specialists in a convenient medical community. In addition, there is a joint ownership agreement between Starr Regional and Athens Surgery Center further expanding the services offered to residents in the community. Starr Regional also has a campus in Etowah, Tenn., a short, ten-mile drive from the Athens location.

Starr Regional is fully accredited by The Joint Commission and is also a designated Chest Pain Center by the Society of Cardiovascular Patient Care, the accrediting arm of the American College of Cardiology. In addition to the acute care services offered within the hospital’s main building, off campus services include neurology, orthopedic surgeons, a comprehensive breast center, oncology, diagnostic sleep center and many primary care and women’s health professionals. 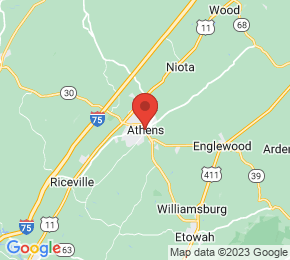