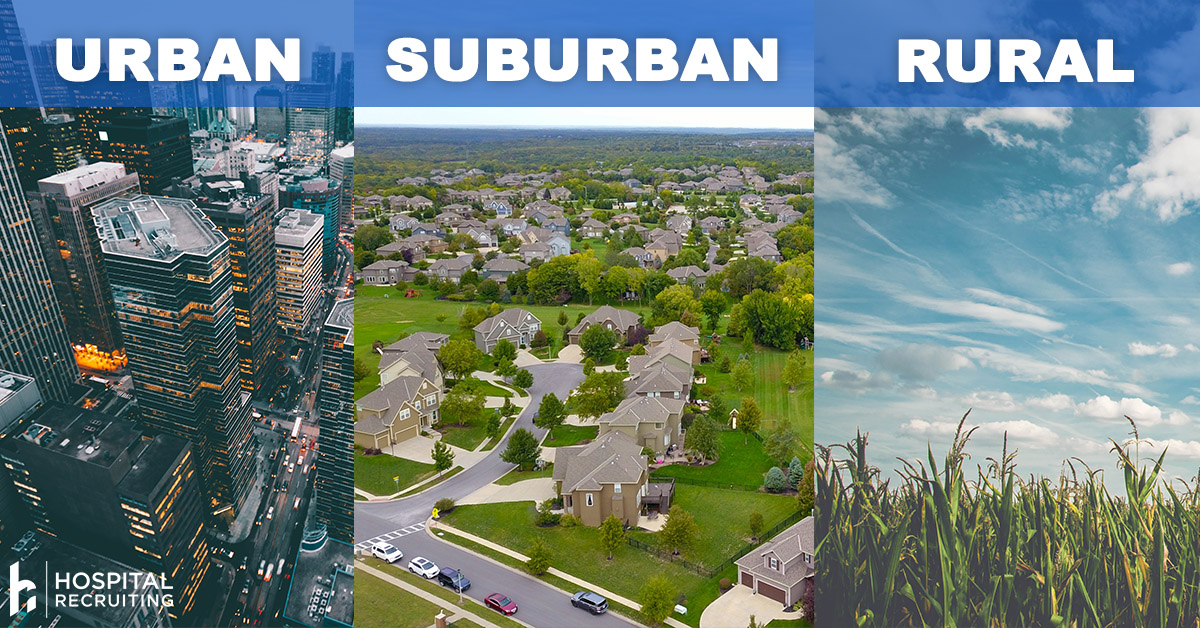 For physicians, leaving training (whether that be residency or fellowship) signals a major shift in agency over one’s life. This may sound dramatic, but from medical school acceptance to matching, the geographic location of one’s posting is more often a result of fate rather than by design. Plenty of young physicians-in-training spend years transplanted on another coast, or in the middle of a major city, dreaming of the day they get to be a “free agent” and live wherever they want. This prospect is exciting and can also feel overwhelming, given the variety of opportunities in the job market for physicians. Unless you have very specific needs when it comes to location (like a partner who is still in training, or elderly family members to care for), the search for a new job can serve as a catalyst for change (of scenery, at least). Here are some things to consider when beginning the job search:

Many physicians start out their training years in or around a large US city. This is due to the high density of major academic institutions in these areas and the high number of actual clinical sites in which to complete clinical rotations. The advantages of practicing medicine in urban environment are manifold.

Whether you seek a private practice or hospital-based model, you are likely to be one of a large complement of physicians within a department. Most cities have large conglomerate hospital systems with sites around the catchment area, which adds to flexibility in terms of commuting times, depending on where you live. Typically, the large academic centers are in urban areas, where the latest research, more up-to-date technology, and higher complexity of patients are located. Life is about the hustle-and-bustle, and your job will likely reflect that. If you’re someone who doesn’t drive or prefers not to drive, urban practice would be best for you. Some of the best cities in the US for public transit: San Francisco, Boston, New York, and Washington DC.

Another aspect to consider when deciding on location is what you value during your time off from work. Are you a hobbyist restaurant reviewer who can’t wait to try the newest and greatest restaurants? Do you live for theater and art openings, keeping your finger on the pulse of culture and the arts? Then working and living in a city would definitely be your best choice.

Some downsides to urban practices are that typically, the salaries in larger cities (especially New York, Philadelphia, Los Angeles, Atlanta) might be slightly lower in comparison to more far-afield jobs. This is because of the higher cost to run a practice, clinic, or hospital within a city in addition to the glut of available talent in that area. This isn’t to say that a base salary will not be more than enough to live. However, the way you live may influence your choice to trade off that salary cut for the perceived advantages of life in a city. Cities are undoubtedly more expensive than their less densely populated suburbs and rural areas. If the value of a dollar is of huge importance to you, a city might not be the right fit. If you are planning on having a medium to large-sized family, the cost of education and housing is certainly an important consideration. Many people who live in large cities choose to vacation or weekend at a second home in a quieter area, such as a forest or beach location. This is worth considering before deciding to settle down in a busy city environment.

One option for physicians looking for a quieter life with the option for big-city fun is to consider working and/or living in a suburb. These areas, typically within a 1.5 hour drive of a major city, provide the ability to live in a house rather than an apartment, with more room to spread out. Life is slower, and the hustle-and-bustle sentiment that is collectively felt and expressed in a city is traded for a slightly slower pace. Practices in these areas would be more likely to connect with a community hospital rather than a larger academic center. However, the need for physicians is high in these areas, and jobs will certainly be more attractive in terms of potential salary and benefits. In suburban areas, public schools tend to be slightly higher performing, which is a consideration for MDs with children. For those of us who value outdoor sports and activities that require room to roam, a suburb is a great option. The location outside of a city is also useful in that one can commute to or from the more densely populated area.

Some perceived cons of jobs in suburban areas are that the access to resources might take slightly longer or require more effort. For example, if higher level care or more complex imaging is required for a patient, you might have to refer them out to a location within a nearby city that would require travel. Suburban locations are also less likely to have academic affiliations, which means learners and house staff would not be a resource to utilize. This would be an advantage for some, and for others a major disadvantage. The commute to work in a suburban area would be slightly longer and would be unlikely to have public transportation options. For a family where there are two parents and children, this would require at least two cars. Life is more spread out, which means more time in the car and less time in either work or home.

The US is well known for its major cities because that is where all the perceived “action” is. However, the vast majority of this country (in mileage) is less populated and very spread-out rural land. Very few areas of our country remain uninhabited, and these residents rely on the care of rural physicians to help them through medical issues. The advantages of considering a job in a more rural area are worth considering. For generalists, the need is very high, which means salaries are significantly higher in these regions as compared to cities and even suburban locations. Doctors working in small rural towns or in sparsely populated areas might have the opportunity to practice in both a clinical setting and also do house-calls, which is still a fairly common practice in rural regions. The skills that a rural physician must have run the gamut, considering you might be the only available MD in hundreds of miles. Because of this, rural regions are a great place to build up your procedural skills and knowledge of health issues affecting all ages and walks of life. This is particularly helpful for family practice physicians. The lifestyle that is possible in rural areas can also be very appealing, especially to those who desire a large home or relative isolation. It is still possible to own hundreds of acres of land and live like our ancestors may have done in some areas of this country and still practice medicine!

The downsides to rural practice represent the “other side of the coin” to many of the advantages. Being isolated and the responsibility of being a solo practitioner is not for everyone. This takes a significant amount of dedication to patients and willingness to work outside of one’s comfort zone for the sake of patients. Willingness to learn and take initiative is a must. Many rural jobs involve long commutes, especially when a position involves clinics or healthcare centers that are located in various parts of a rural county. Patients who require seriously higher levels of care may need long ambulance or even helicopter rides to local medical centers for care, which can be stressful. The resources available on a clinical level will likely be slightly lighter than in a more heavily endowed and populous city region.

As the classic real estate saying goes, “location, location, location.” The surroundings in which one works play a huge role in job satisfaction and burnout levels. It’s important to consider where you will be living and spending your days outside of work, and in turn what your commute and job life will be like during the many hours spent in healthcare. It’s key to consider the above-mentioned elements when deciding on the job-hunting process.

I am a chief resident in Ob-Gyn at a busy community hospital in Connecticut. My interests include Maternal-Fetal Medicine, Ob Critical Care, and Ultrasound. I have done research around quality improvement in maternal care, and gestational diabetes. I’m hoping to go into fellowship in MFM to further hone my skills and expertise in caring for moms and their babies. In my spare time I love to play tennis, do yoga, run, cook, and enjoy the outdoors. I also find writing to be an essential outlet for both my ideas and creativity!
View all posts by Laura Gilroy, MD