8 Signs You Should Avoid That Potential Employer 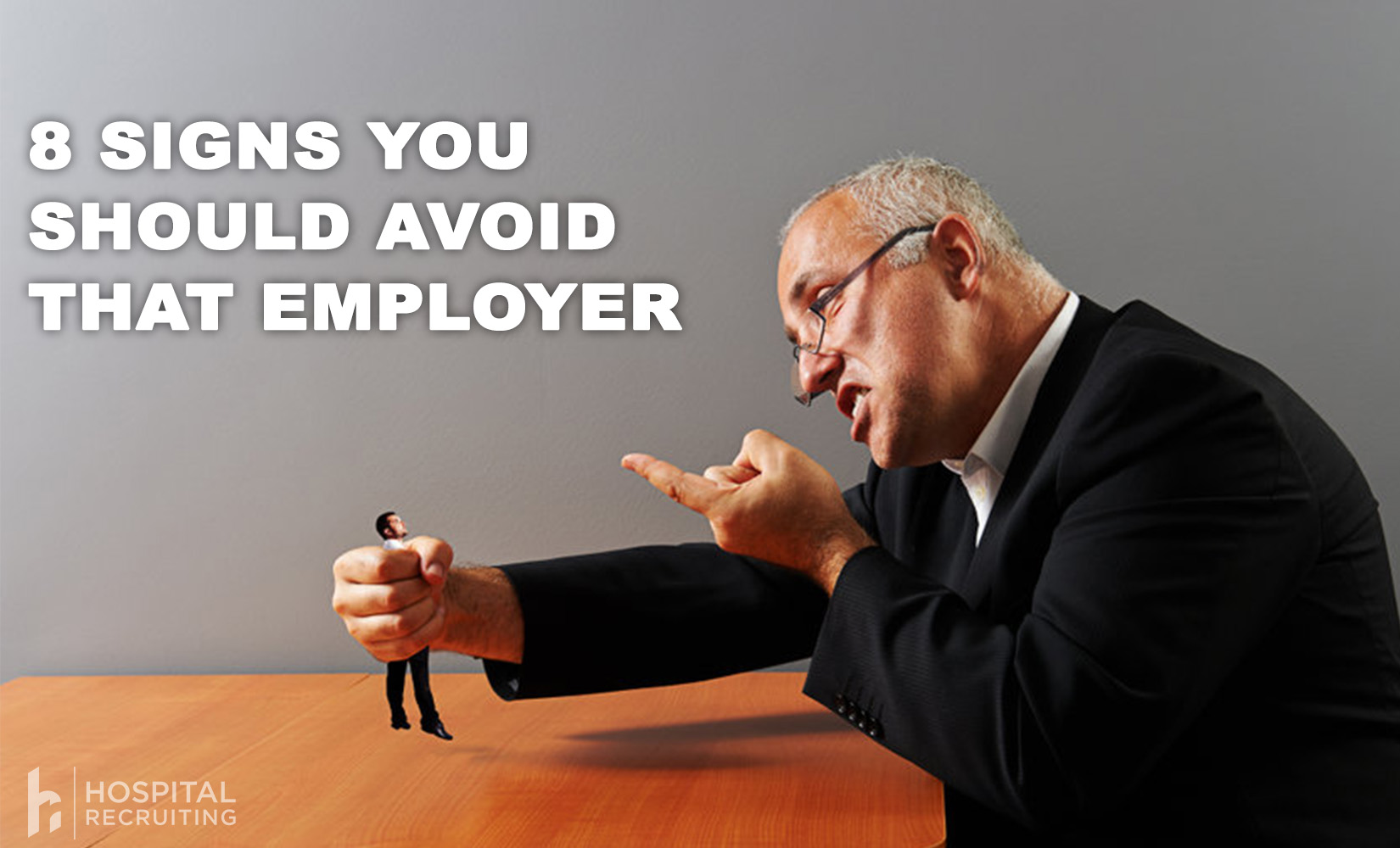 When applying for and interviewing at a potential employer, the last thing you want is to score a new position, only to find out that your new employer is a nightmare. While financial motivators are always a driving factor for seeking employment, money is not everything. Taking on a new job that disrupts your life outside of work or makes you miserable is often not worth it.

There are many things that can go wrong and make a new position less than desirable. While you will not be able to learn about every potential negative during the application and interview process, there are several possible clues that should alert you to the chance that something could be wrong. These warning flags fall into two main categories: problems that are evident at the company level and problems that will become evident during the interview.

Company Red Flags to Watch For

Sometimes a company’s culture or environment is subpar and isn’t a good fit. These may only apply to a specific department or the company as a whole. There are several warnings that you can look for at the company level to avoid getting a job that you only thought you wanted.

It is always appropriate to ask what the turnover is in a department or company.  A hiring manager will normally know these figures. If your interviewer or human resources contact is evasive with this information, it could indicate that there is a problem. A high turnover rate also indicates that something is likely wrong. If a company is truly good place to work, people are typically reluctant to leave.

In the age of the internet, reviews by former or current employees are widely available for most companies. While every company will have a bad review or two from a disgruntled ex-employee, a pattern of similar negative reviews should serve as a warning that issues may exist.

If you submitted a résumé that had multiple errors or showed up to an interview late, it would be the end of your consideration as a candidate for a position. The same standard should apply to the employer where you are interviewing. Mistakes in offer letters, interviewers who arrive late or reschedule at the last minute, or a general sense that the company is disorganized should all serve as potential warnings.

Too Good to Be True

If an employer or a job sounds too good to be true, it might be. A position that pays significantly more than similar positions or that offers unusually rapid career advancement is either likely not legitimate or has a serious problem in keeping employees. There are great opportunities out there, but if it sounds too good to be true, you should take a deeper look into why.

Interviewer Red Flags to Watch For

While the general presentation of the company or department itself matters, your interviewer will often be the actual person for whom you will be working. Even in a good company, working for a bad boss can be miserable. There are things during the interview that you should be attentive to as potential warnings that you may not want a certain position.

If during or after the interview, your new employer is aggressive or shows desperation for a decision, it can indicate that there is a problem that is causing them to desperately need new employees. Often, this is due to a high number of vacant positions that may be caused by high turnover or difficulty getting people to work for them. This can also indicate that you will have a heavy workload starting off, as there is likely to be decreased workforce to support you in your new role.

A general negative attitude by your interviewer, especially if directed towards existing staff, is a big red flag. If your hiring manager is willing to speak poorly of staff to an interviewee, it means it will likely not be long before he is speaking badly of you to others. A negative attitude towards staff, whether they report to him or are above him, is likely an indicator that you do not want the interviewer as your boss.

A good leader will be confident, but not arrogant. Interviewers that are narcissistic or overly focused on themselves will likely put their own interest above that of their team, including you. If interviewers are less interested in learning about you and more interested in telling you about themselves and their accomplishments, they may be less likely to help you develop in your professional role.

A healthy employer-employee relationship requires some give and take. You give of your time and effort, and as a result, you develop your skill and advance in your career. Beware of an interviewer who is only interested in what you have to offer and what you can give without explaining how they will benefit you.

What to Do If There Are Concerns

If there is a potential concern during the interview or application process, it doesn’t necessarily mean that you shouldn’t take the job, but there are some steps you can take to avoid a potential disaster.

First, slow down. A bad employer will often realize that the more time you take to research them, the less likely you will be to take the position. This may lead to pressure you for an immediate decision. Second, do more research. There are many ways to learn more about a company, and you should invest the time to find out more. Third, talk to connections who may have additional insights into the company.

By carefully watching out for warning signs, you can avoid a nightmare and snag your dream job.

Caleb is an Ivy League-educated nurse consultant with a strong clinical background, including supervisory positions within ICU and ER settings. In addition to his clinical work, Caleb practices as an expert nurse consultant and nurse writer, having written hundreds of healthcare-related articles and advised major businesses across the country on healthcare matters. He is a member of the Emergency Nurses Association and the American Association of Critical Care Nurses and holds multiple advanced certifications in emergency and trauma nursing.
View all posts by Benjamin "Caleb" Williams RN, BA, CEN